The volcano that reigns on Fagradals Mountain in southwest Iceland has been dormant for six 6,000 years. Last Friday night, 19th, after earthquakes in the area, the volcano erupted – the first the Reykjanes Peninsula has experienced in 781 years. 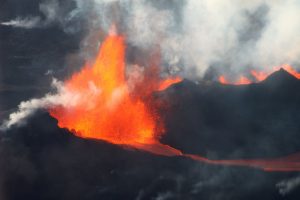 The phenomenon occurred at night and lit up the entire region. According to The Associated Press, the glow of lava can be seen about 30 kilometers away from Reykjavík, Iceland’s capital.

On social media, the Icelandic authorities asked people to stay at home and, during this period, keep windows and doors closed to avoid contact with the ash and other gases, which are released by lava during the eruption process.

According to the US State Environmental Protection Agency, the gases, which include sulfur dioxide, carbon dioxide and hydrogen fluoride, are potentially dangerous.

Iceland’s Meteorological Office said on Saturday morning, 20, that the presence of the gases “should not cause much discomfort for people, except for those who live near the source of the eruption.”

On its website, the agency revealed that scientists and other professionals continue to monitor gas emissions and reported that volcanic activity has decreased since Friday, 19th. the lava – are approximately between 500 and 700 meters long.

“The lava fountains are small and the lava flows pose no imminent danger,” noted the Iceland Meteorological Office. The country’s Scientific Council for Civil Protection said it does not believe the eruption is a threat to local structures. 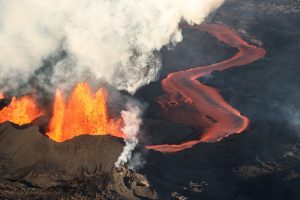 As we reported here, southwest Iceland has been hit by a “swarm” of earthquakes since February 24th. Dozens of them had a magnitude of 3 or more, meaning that all activities were felt.

On Thursday the 18th, just a day before the eruption, Iceland’s Meteorological Office reported a total of 400 earthquakes in a span of just seven hours. Despite the extent, the seismic activity was much lower compared to others where there were about 1,000 earthquakes.

Scientists and competent authorities have been on alert since April 2020, as at that time, according to the Tempo portal, more than 8000 earthquakes were recorded in a volcanic region of Iceland. The activity, experts say, is a sign that more and more volcanoes could erupt at any time – as they have now.

The Rejkanes Peninsula, located southwest of the Icelandic capital (Reykjavik), where seismic shocks have been felt with a certain frequency since then, is currently the most monitored, mainly due to the fact that the ground is constantly being pushed by magma, which continues on the rise.

“It appears that after being relatively inactive for several centuries, this region is about to awaken,” said volcanologist Dave McGarvie of Lancaster University, UK. As stated by the Tempo portal, “geologists believe that the Reyjkanes peninsula deserves greater attention due to the duration of the active periods, around 300 years of activity, and the type of volcanic activity”.

The Basics of Gambling in a Betting Casino

The Basics of Gambling in a Betting Casino While gambling in a betting casino can be a fun experience, it is also a gamble. While you may not be able to win the jackpot live casino SG, you can still...

How to Get a Free Bonus in Casino

From Where To Avail The Best Security For Keeping The Home Safe Whether moving from one place to another due to change in place of accommodation or shift of place of job is the time when you need the home...